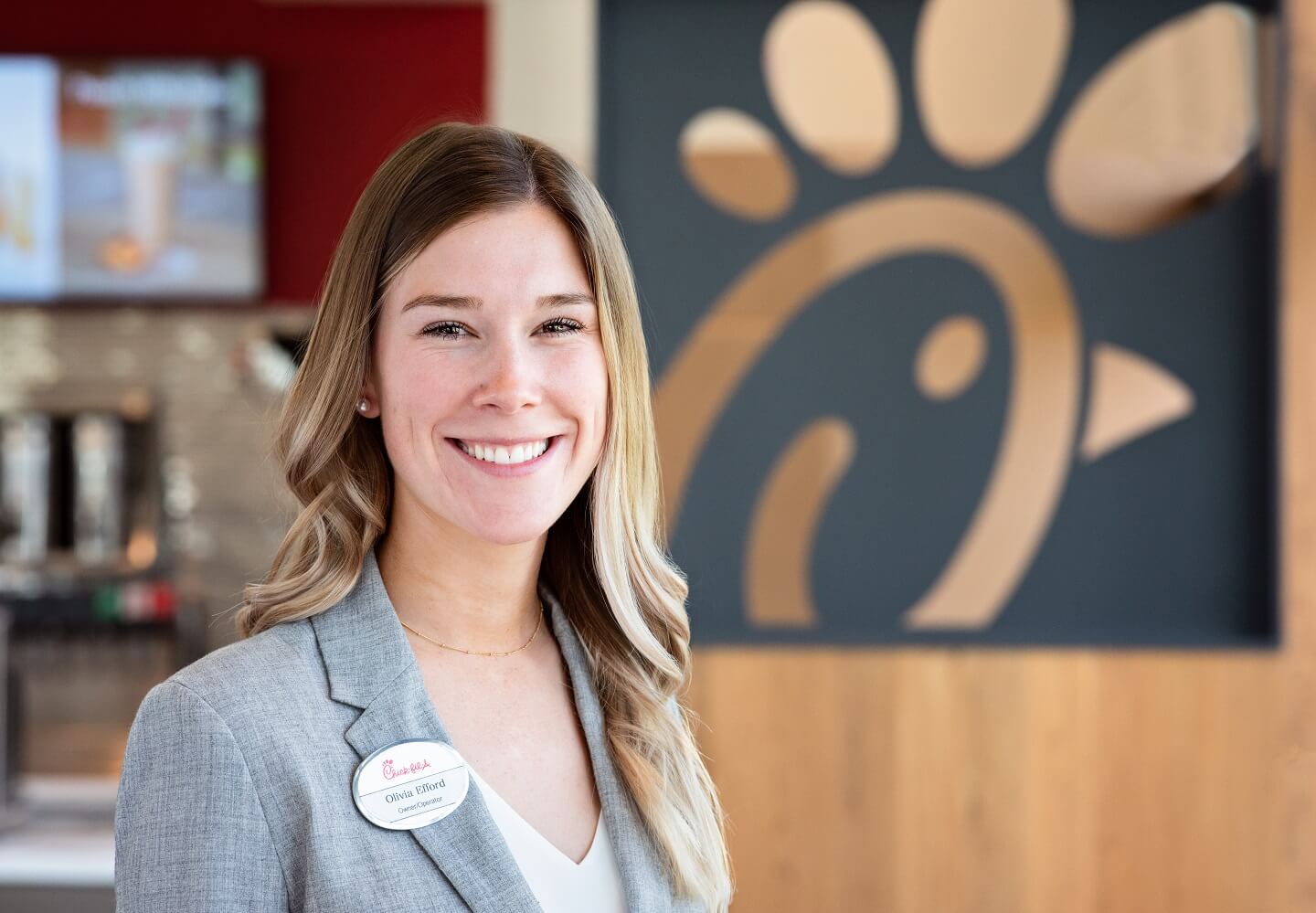 Right from her first bite, Olivia Efford knew Chick-fil-A had a lot to offer Canadians.

When she was 10, her family travelled from their Ontario home to Florida to cheer on Olivia’s Uncle Wayne at the Grand Opening of his Chick-fil-A® restaurant.

“I ordered a Chick-fil-A Chicken Biscuit for breakfast,” recalls Efford. “I remember wishing we could have it in Canada, too. I was definitely on to something.”

She didn’t know it back then but Efford herself would one day play a big part in bringing the Chick-fil-A experience to Canadians.

Having spent years learning the art of leadership at Chick-fil-A, Efford says she’s eager for the opportunity to introduce more Canadians to everything it has to offer.

After all, she’s a Canadian herself. Efford was born in the U.S. and has lived parts of her life there, but from age three she spent her childhood in Burlington, Ontario, about an hour down the highway from Kitchener. She also earned her degree nearby at the University of Guelph.

“This is a homecoming for me in so many ways,” she says. “I’ll always feel at home in Canada. And I’ll be working at my other ‘home’ — which is Chick-fil-A.”

Service runs in the family
Chick-fil-A has played a huge role in the lives of the Efford family. “You could say it’s in the blood,” Olivia says.
Her Uncle Wayne’s success as an Owner/Operator in Florida inspired Olivia’s father, Glen, to switch careers and become an Operator himself. Efford relocated to Mentor, Ohio to work at her father’s restaurant after graduating from university.

Naturally, Glen Efford became Olivia’s mentor and she observed first-hand, how to serve a community as both an entrepreneur and a leader. It’s not uncommon for Chick-fil-A Owner/Operators to take active roles in their communities as well as their Team Members lives. While donating their time and resources to local charities, they also provide development opportunities for Team Members they often refer to as “family.”
“I get a little emotional thinking about all the people that my dad and my uncle have taken under their wings,” Efford says. “Team Members in Kitchener will get to experience that, too. I’ll work hard to create a nurturing environment where Team Members will understand their talents and work toward their dreams.”

Hello (again) to Canada
Efford’s journey to becoming an Owner/Operator included a front-row seat to Chick-fil-A’s entry into Canada. As a participant in Chick-fil-A’s Leadership Development Program, she was on hand to help manage the Grand Opening of the first and second franchised Chick-fil-A restaurants in Canada, both of which are in Toronto. The first was Chick-fil-A Yonge & Bloor, in 2019 and the second was Chick-fil-A Yorkdale in January 2020. The Kitchener restaurant will be the country’s third.

Chick-fil-A is also known for having Team Members that take pride in delivering quick and attentive service. “We always try to go the extra step. That could be a warm, personal greeting when you arrive, or a thoughtful gesture, like remembering to add a regular customer’s favourite dipping sauce to their takeout order,” Efford says. “It’s hospitality on a level that Canadians don’t necessarily expect in quick-serve restaurants.”

Many people in Kitchener will soon experience that hospitality for the first time. Thinking back to her own memorable first bite 18 years ago, Efford says they’re in for a treat.

“I’m so excited and grateful to have a chance to show people back home in Canada what Chick-fil-A is all about,” Efford says. “It feels like I’ve been preparing my whole life for this.”