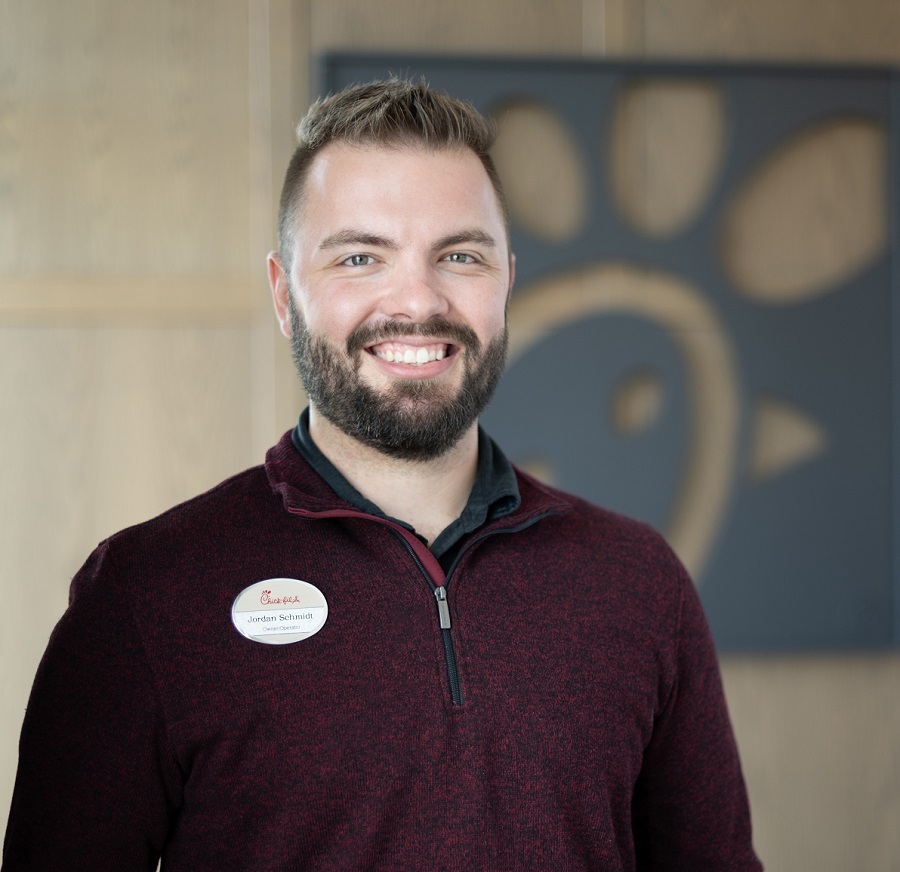 For Windsor's first Chick-fil-A Operator, ‘hospitality’ isn’t just a word — it's a career

Before he knew the word "hospitality," Jordan Schmidt knew it was something he wanted to share with others.

Jordan was born in London, Ontario, and has deep roots in the southwestern corner of the province, as his dad is originally from Leamington. But he mostly grew up in Palm Harbor, Florida, where Chick-fil-A® became his favourite restaurant from an early age.

Now, Jordan is the Operator of Chick-fil-A Devonshire, and he is working to introduce Windsorites to his Chick-fil-A restaurant as a place where they can gather and grow, just like he did.

“It’s not just a restaurant with a great chicken sandwich,” he says. “We can be a place where our customers can connect with each other, and where our Team Members can come together to serve their community.”

As a veteran of the restaurant industry, Jordan has been impressed by the skills and can-do attitude of the local people he has met so far in Windsor-Essex. He is excited to team up with them to bring Chick-fil-A Devonshire to life as a community gathering place.

“It’s great to be back in Ontario,” he says, “and the spirit of people in the Windsor-Essex community is really inspiring.”

Jordan knows that for many people, a job at a quick-service restaurant is a steppingstone in a journey that may take them somewhere else. But out of the approximately 150 Team Members Jordan expects to hire at Chick-fil-A Devonshire in full- and part-time roles, he hopes some will see a brighter future in a hospitality career. “I’m a real believer in hospitality as a calling itself — a viable, rewarding career path,” he says.

Jordan’s own story demonstrates how the supportive training environments of Chick-fil-A restaurants can turn anyone’s time as a Team Member into a fulfilling career — no matter what their experience or background may be.

Jordan’s career in hospitality began in 2013, when he joined Chick-fil-A Westfield Countryside Mall in Clearwater, Florida. He took on the role of Hospitality Director and learned the Chick-fil-A way of going the extra mile to make every guest feel welcomed and appreciated — whether that meant honouring a special request, offering help to someone who needed it, or just remembering a regular customer’s favourite order.

That all adds up to hospitality, Jordan says, and it’s a skill that will serve anyone well in the restaurant industry (and pretty much anywhere in the service sector). “It’s all about giving people the same feeling of being welcome that I experienced at my local Chick-fil-A restaurant as a kid.”

Also, during his career at Chick-fil-A Westfield Countryside Mall, Jordan received a Remarkable Futures™ Scholarship to help with the cost of his studies, a benefit that Chick-fil-A Team Members in Canada can also access. He also participated in the Chick-fil-A Leadership Development Program, an experience that instills leadership skills in potential future Operators.

“Cultivating hospitality has been the theme all through my experiences,” Jordan says, “The art of hospitality will be at the heart of the transferable skills that Team Members learn at Chick-fil-A Devonshire.”