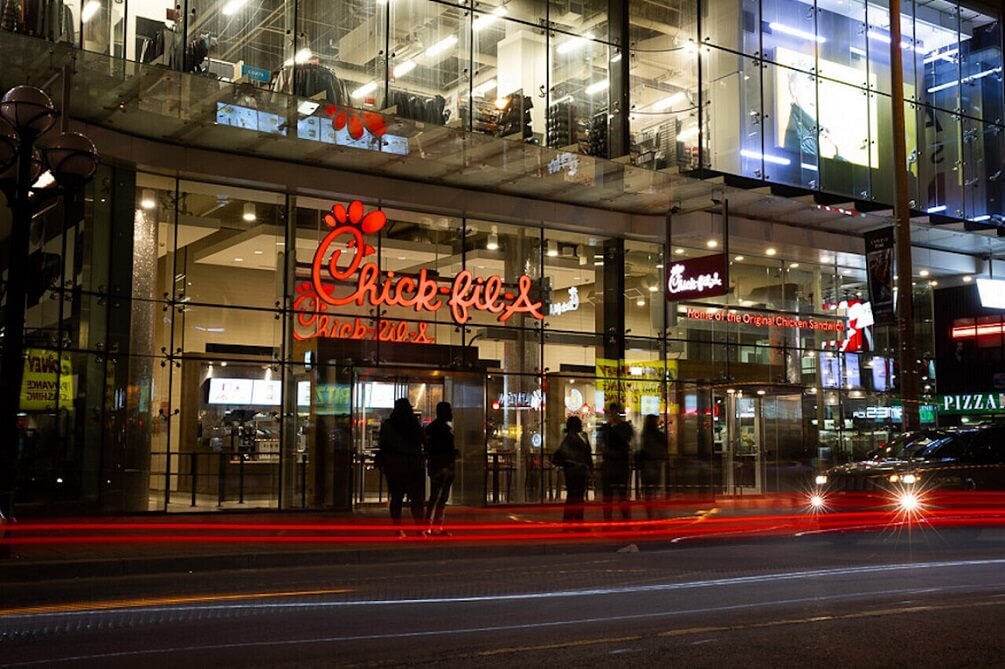 TORONTO (October 26, 2022) – Chick-fil-A® will expand its long-term investment in Canada, growing from six to 20 stores by 2025, with plans to open seven to ten restaurants per year thereafter. Construction is already underway on new locations in Vaughan and Barrie, with additional future locations expected at Toronto Eaton Centre, Square One, and Shops at Don Mills. Chick-fil-A also expects to continue its expansion into new Canadian markets in the coming years, including Ottawa (Ontario) and the province of Alberta.

“We’re excited for the opportunity to serve more guests and to invest in more communities across the country,” said Anita Costello, Chief International Officer. “Canadians can look forward to an authentic Chick-fil-A experience at each of our locations: delicious food prepared with high-quality ingredients, served with our signature hospitality.”

As part of the expansion, the Canadian entrepreneurs who will be local Chick-fil-A Owner/Operators are expected to hire approximately 80-120 additional employees at each new location, joining the more than 400 already working at the six existing locations in Toronto, Scarborough, Windsor, and Kitchener.

“At Chick-fil-A, demonstrating care is core to our culture and at the heart of everything we do,” said Wilson Yang, Owner/Operator at Chick-fil-A Yonge & Bloor. “It’s only natural that care would extend outside the doors of our restaurants and into the communities we serve.”

In 2020, Yonge Street Mission (YSM) was the first Canadian organization to win one of the US $300,000 Chick-fil-A True Inspiration Awards™. Operator Wilson Yang nominated the organization for the grant, which allowed Yonge Street Mission’s Evergreen Centre to provide essential services including medical, dental, counselling, and employment to over 4,000 youth during the pandemic.  The local partnership continues with Yang regularly providing hot chicken sandwiches as part of YSM’s Takeaway Meal service. Queen Street West Chick-fil-A Operator, Keisse Azevedo, has also joined the partnership through the Chick-fil-A Shared Table® program, regularly donating surplus food from her restaurant.

“In a season where we are trying to get through each and every day, we are grateful for our strong partnership with Chick-fil-A Operators who are committed to helping us support hungry and hurting neighbours without disruption,” said Angela Solomos, VP, Philanthropy at Yonge Street Mission.

Each Chick-fil-A restaurant is owned by a local Operator with a personal involvement in their business, focusing on building meaningful connections to their communities, investing in team member talent, while serving great-tasting food and providing a positive guest experience.

Chick-fil-A is currently accepting expressions of interest for individuals who are interested in becoming Chick-fil-A franchise Owner/Operators in Ontario and Alberta. To learn more, visit chickfila.ca.franchise.info.

Atlanta-based Chick-fil-A, Inc. is a restaurant company known for the Original Chick-fil-A® Chicken Sandwich and signature hospitality. Represented by more than 170,000 Team Members, Operators and Staff, Chick-fil-A® restaurants serve guests freshly prepared food at more than 2,700 restaurants in 48 states, Washington, D.C., Puerto Rico and Canada. The family-owned and privately held restaurant company was founded in 1967 by S. Truett Cathy and is committed to serving the local communities in which its franchised restaurants operate.

Known for its leadership and growth opportunities, in 2022 Chick-fil-A was named a Best Employer in America by Forbes and a top company for career opportunities for Black employees by Glassdoor. The company was also awarded the Employee’s Choice by Glassdoor honouring top CEOs and was named a Culture 500 Culture Champion in 2020. A leader in customer service, Chick-fil-A was named QSR magazine’s Drive-Thru Restaurant of the Year in 2021. More information on Chick-fil-A is available at www.chick-fil-a.ca and @ChickfilANews.